I remember @Norm saying something previously about needing a specific size of cap to reuse twist-off bottles properly but I didn’t take notes - can I get a refresher? I purchased some crown caps a while ago from Beer Grains that don’t mention the size but it says in the description “not for use on twist offs”.

I’ll have to double-check what I am about to say, so take it with a grain of malt:

Twist-off caps are made of slightly softer metal and tend to have a larger overall diameter, so the threads are covered, as opposed to the pry off caps.

it says in the description “not for use on twist offs”.

It is unfortunately more difficult to source small (355 ml) pry off bottles in Québec than twist off ones. That is why I generally bottle in 500 ml bottles.

Thanks! With cans taking over it’s indeed getting a lot harder to find 355ml crown cap bottles.

Follow-up question! I soaked some St-Ambroise twist bottles overnight in hot oxyclean. The labels fell right off, super. I scrubbed them thoroughly inside and out and after drying they are still not clear as new. Some of the marks on the outside are obviously just scratches from the bottles being reused which I don’t like but I can live with. However there are also marks on the inside that look like residue. I soaked and scrubbed them again but they’re still there - any thoughts? 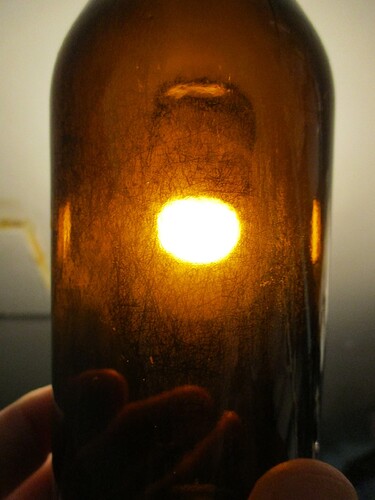 Did you rinse them? It could be leftover oxyclean that dried out. Or crud that doesn’t go away…

I didn’t rinse them after drinking them originally, but I rinsed the oxyclean off them for sure. Next time I get beer in twisties I’ll rinse them immediately after imbibing and try again.

I’ve heard of beer stone accumulating in old bottles, though I’ve never seen it. An acid rinse might get rid of it, though that might be more work than it’s worth.

I had already recycled the one in the photo but found some others with the same stubborn problem and I’m not sure if this is what you meant by an “acid rinse”, Kurt, but Sam suggested I try a soak in StarSan and it worked, they’re good as new - thanks!

Acid based cleaners are good at removing beerstone. Star San is acidic which is why it worked

After wasting some time on the HBT forums it seems like this might not be beerstone but rather a residue left by Oxyclean that was too concentrated (I never measure the stuff) - but the acid rinse seems to clear both up. Cheers.