Salut le monde. I boil around 13L in a 17L kettle on a glass electric stovetop and get a boil but nothing I would call vigorous. A few brews ago I started using a hop basket and noticed that there was a lot more bubbling during the boil and the boil-off volume increased significantly. Is it possible that the hop basket touching the bottom of the kettle is creating an effect to increase the boil vigor?

Was there vigorous boil happening within the basket? When I use a basket I don’t get much of a boil going on inside the basket. My basket bottom is a long ways from the bottom of my robobrew.

The bubbles are concentrated around the basket but not inside it. I’m wondering now if it just has to do with there being an extra chunk of hot steel in the pot, generating more heat, rather than “nucleation points” or whatever created by it touching the bottom.

This got me thinking about hop basket use. I have taken temperatures within the basket and it reads 100+ degrees when the boil is happening so I don’t think the lack of vigor within the basket is an issue, but I wonder if the fact that the hops are concentrated in the basket affects utilization, especially during a hopstand for a NEIPA.

I wonder if the fact that the hops are concentrated in the basket affects utilization, especially during a hopstand for a NEIPA.

I’m using a hop basket too with my Grainfather and I was wondering the same thing… But every 15 min or so, I’m shaking the basket to make everything back in suspension.

I switched from using a hop basket, to oversized hop socks, to simply throwing the hops directly in my GF. There is a noticeable difference (for me).
The biggest challenge for me with hop baskets was how quickly they get clogged and how hard they are to clean/unclog…

I recently picked up a brew bag from Mout, and have been using it as a huge hop sock on my GF. It ties around the top and dangles about 2/3 the way down the pot. I haven’t done enough brews with it to make a statement on difference in hop character, but it definitely helps keep the large whirlpool hop loads out of the filter, and gives them plenty of room to float around freely without packing together. 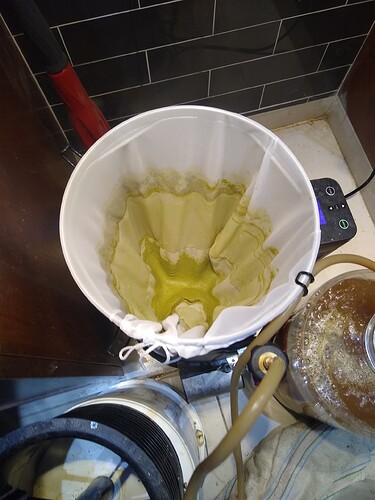 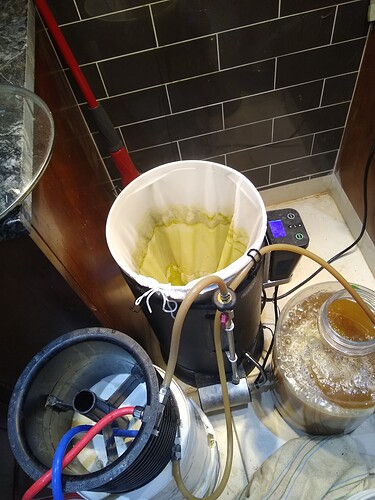 To Marc’s original question - my guess is that if the hop spider is resting on the bottom and the metal is acting like the radiator on a CPU fan. The heat is conducting into the hop spider where the thin metal mesh is providing a larger surface area on thinner wire that contacts more wort (and potentially has more imperfections or nucleation points). @MarcGuay do you notice any signs heat damage or burning on the spider or the hops?

I like the brew bag idea. I assume you just use it in the boil?

I’ve only used it at flameout so far, but it has shown no signs of damage, so I don’t think there should be a problem using it during the boil. I find the GF filter handles a couple ounces of hops with no problem, it’s only when I do big hop charges for things like IPAs that want to keep the extra sludge out.

Nope, no problems there.

I would check the material of your brew bag before boiling it.

@Yac.b If you have a dishwasher toss the hop basket in the top rack and it comes out spotless.

I’m using a hop basket too with my Grainfather and I was wondering the same thing… But every 15 min or so, I’m shaking the basket to make everything back in suspension.

Personally, I like using the hop spider to do the same thing as the bag of our beloved president, that is to keep a good chunk of the hop material out of the Robobrew kettle. I get a compromise between hop utilisation and hop clogging. To compensate for the hop utilisation decrease of using a spider, I run the pump through the spider quite a bit (bringing wort through the spider), especially a few minutes after every hop addition, and I stir vigorously with a paddle inside the hop spider. You can see the oil get out of the spider and float/spin around in the kettle when I stir. I actually end up with a decent amount of hop matter at the bottom of the kettle (it gets out of the spider, despite the fine mesh) by the end, so the spider does not keep everything out that way, but I don’t mind: the reduction is enough to avoid clogging the pump in heavily hopped worts and everything that gets out of the spider contributes to giving extra surface hop-wort interaction for better utilisation, so a good compromise for me. The spider works better at keeping in cones than pellets, but I don’t brew often with cones (only a few weeks after I harvest my home-grown hops).