Maybe in the wrong section but figured I’d ask… this has been my first time kegging, first keg. I set it and forget it two weeks ago at 12 psi, prior to doing so soap tested the entire system for leaks (found none) and everything has been fine, it held and carbonated the beer. At one point I checked the gauges and it had raised to 15, I disconnected the gas line, relieved some pressure from the keg, reset to 12 and no issues. Friday I hooked up the beverage line for the first time and had my first few pints. Perfect, no issues. Saturday afternoon I realize there’s not nearly enough head, it’s coming out slower and upon checking my gauges, realize pressure reads 9 psi and dropping. I disconnected the gas from the keg and attempted to go over the system to leak test it but at this point the tank is empty.

there was no leakage of beer, so I’m assuming gas couldn’t have been leaking through the liquid out disconnect or beer line. Odds are I just missed something in my leak test? Why would it not have all leaked out prior to attaching the beverage line? It’s a brand new keg and I checked it as well when I set up the system and found no leaks. That being said, I’m assuming that the keg, even though I disconnected from the gas, has most likely equalized at a lower psi and is now flat.

I’m not in danger of the beer being damaged? Sounds silly, and forgive my paranoia, but I have no way to get more co2 and begin the process of trying to find the leak for 2 days and in that time it would suck if I lose the beer as well.

Also anyone know a place I can find to refill or exchange a 5lb co2 tank on a Sunday? Doesn’t seem to exist.

That is sad, but not catastrophic. First let’s make it clear that the leak is not or the beer line, otherwise beer would be leaking.

From my experience, the leak is most likely on the keg cover, or even on the gas post when you disconnect the gas line. Check by spraying starsan.

If there is still pressure in the keg, even if low, the beer is safe.

My guess, based on the info you gave, is that you have a very small leak somewhere in the gas side of things (like Xavier said), but that the beer won’t be ruined. Small leaks can take quite a while to run a tank empty. Sometimes it’s a day, sometimes a week (or more). The fact that yours took took two weeks to empty makes me think it’s either a very small leak (which unfortunately might be quite hard to find), or you dislodged a seal somewhere when you connected the liquid side (unlikely, but possible).

As for the beer itself - pouring without head is not necessarily an indicator that the CO2 has left solution. Slower pouring (from lower head pressure) will reduce the head you get too. Did the beer still have carbonation when you drank it? If so, it’s a good sign that the beer has CO2 in it, which will mean that it will keep a positive pressure in the keg until it equilibrates with the atmosphere. If it is a slow leak from the main seal at the top of the keg you should have more than enough time to get a CO2 refill on and find the source of the issue before the beer oxidizes. To put it another way, the time it took to empty is roughly the time you have fix it before the beer goes. Oxygen won’t creep in through a small hole that is still slowly leaking out CO2. You may have to recarbonate the beer, but it shouldn’t have major damage.

As for checking once you have a full tank, this is what I would do -

Also make sure you open the co2 thank all the way. These things are made to be either fully opened or closed.

I use starsan in a spray bottle to check for leaks. It will foam on gas leaks. My first 5lbs bottle emptied on my first keg. The culprit was the pressure release valve on the keg.

I’ve replaced almost all my pressure release valves on my kegs for that reason alone!

I purchased these from a retailer I’ve purchased from several times. I don’t know if these are available locally or even from a Canadian supplier. I just buy from CHI Company because they ship USPS and I usually don’t pay any duty or taxes unless it’s a big order.

BTW, they are also a good source for anything else you might need keg wise.

I once had a leak from the valve stem on a ball valve on my distribution block. It would only leak while in the open position (very slowly). Took me months to find it.

For CO2 fill-ups on the weekend, I do not know of anywhere that does that.

Anyone have a suggestions on this?

That might be the trouble I’m experiencing with my CO2 setup. I’ll have to look into that.

Regarding filling CO2 tanks on the weekend, the Bootlegger in Baie D’Urfé does it. If memory serves, they instruct people to put the tank in the freezer overnight and deliver it to the store frozen so it can be filled more effectively.

The best advice I can give is to have back up tank. I have two 20 lb and one 5 lb. One 20 lb is in the keezer and the other in the brewery for filling kegs, etc. The 5 lb is my backup in either of the 20 lb tanks blows during the weekend.

Thanks for all the response. I bought the entire setup used off kijiji, and it being my first time kegging didn’t notice or realize there was no o ring or washer between the regulator and the tank. What I dont get is that being such a major connection, I’m surprised it took that long for me to notice or for the tank to drain. Also, that I didn’t hear it when leak testing. 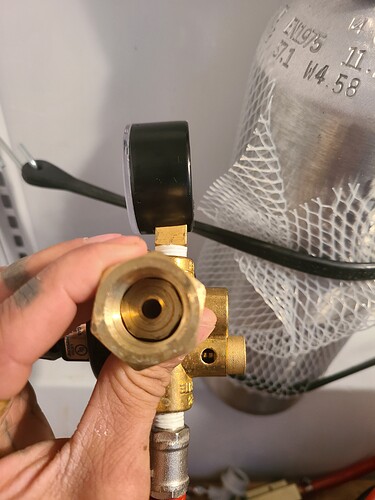 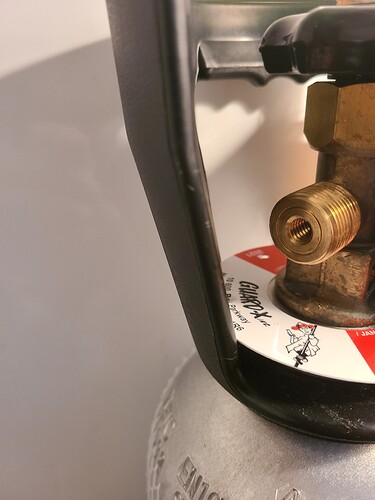 Def need a backup tank but can’t afford it right now. Definitely gonna get on that soon.

Still going to check the entire system more thoroughly upon refilling so it doesn’t happen. The beer was carbonated but not much, it’s a fairly hoppy pale ale so hopefully it doesn’t oxidize horribly by the time I get co2 tomorrow. I disconnected the gas as soon as I realized what had happened.

@Pig_Champion Missing that washer is the most likely culprit of your leak. I’m surprised it took so long to empty the tank. You have two choices for this:

I ran into the hidden leak problem myself a year ago after decades of kegging. Unfortunately it cost me the contents of a 20lb tank. Since then I make sure to always turn the gas off when I’m not actively carbonating or dispensing. It’s the only fool proof (me being the fool) way I know to avoid this since I’ve found that it’s really difficult to trace leaks and sooner or later something always leaks.

There are other ways to carbonate beer that don’t require keeping pressure on it for an extended period of time. Lots of people use a carbonating stone. Aside from buying the stone you need will typically want to have a dedicated keg to use for carbonating since the stone needs to be at the bottom of the keg and to achieve this you’ll usually want to convert the gas inlet by adding a long drop tube of the type used to draw beer out from the outlet line. So carbonating in a dedicated keg and then transferring over to a serving keg is the more common approach.

Alternately you can do what I do. That is to connect the CO2 to the standard inlet and turn the pressure up as high as possible. On my regulator that’s usually around 50lbs. I then tip the keg onto it’s side with the inlet towards the floor and rock the keg back and forth for about 10 minutes. I usually do this while the beer is at cellar temperature or colder. The colder the beer is the faster it will absorb the CO2. The rocking helps the CO2 absorb into the beer as it bubbles up and through it by increasing absorption surface area. Once I’ve rocked it long enough I put it in the beer chiller and get it down close to 32F.

This is admittedly a brute force method and the beer will usually be a little over carbonated to start though not always. If the carbonation level isn’t right I continue to add over pressure while it’s chilled and give it more time. I always vent the keg at the safety valve before I first try to dispense it. I’m rarely in a rush to tap my beers and will give Ales 7-10 days to drop fully bright in the keg and lagers 3-4 weeks to drop right and age.

I find that if even after venting it pours a little too foamy I can just put enough pressure on it (5-10lb) to keep the oval seal set on the keg and the excess pressure will come out of solution over time. I usually have two 5 gallon and one 3 gal keg on tap at any time so for me it’s not a big deal to drink something else and wait for the beer to find its own equilibrium.

I know this isn’t an elegant solution but it’s low tech and somewhat idiot proof if I can do it ;-)…

I use Dr_Beer’s strategy to avoid CO2 leaks too. My beer serving fridge isn’t normally used for carbonating, so the valves are off unless I’m actively hosting friends & pouring beers, which is pretty rare these days.

Regarding carbonating, Dave Morrison shared his strategy with me, which seems to work every time and requires virtually no hard labour or even thinking. I carbonate at 30psi for 24hrs at fridge temps (2-5C), then purge and reconnect to my gas at serving pressure (in my case, usually around 12psi, but this depends on the lengths of your lines and your fridge temp). Leave it another 24 hours (or maybe not even) and it should be ready to drink. I nudge the final pressure up or down a bit depending on style and preference. I haven’t had any issues with overcarbonation.

I use the same strategy as well, the only difference is 40 psig instead or 30 psig but it makes no big difference.

I guess I don’t have a regular schedule for carbonating. Since I can have up to 7 different beers on tap at once; most times I just hook up the keg to my serving pressure (11psi) and leave it until I’m ready to try it out. I will occasionally force carbonate similar to what Kurt does; that is 30-40 psi for a day before sticking it in the serving fridge.

I only have room for 2 kegs at the moment hopefully can squeeze a third in. went with the nylon washer and everything seems to be holding fine, im in no rush to drink for the most part, patient enough … although this first keg is going quick lol