I ferment cider every fall. It’s easy, it tastes great (I only make dry english style ciders, and occasionally throw in a subtle amount of fruit or hops) and my friends like it too.
Unsurprisingly, I’m hosting friends less often than usual and so my stock of cider isn’t decreasing anywhere near it’s usual rate. I find myself with several kegs of fall 2020 cider in addition to the 2021 kegs that are slowly maturing. It’s still great, arguably at it’s peak, and am looking for brewers that might want to do some bottle trading.
Cider is more expensive to make than beer, so I was thinking 2:1 or 3:2 for a beer:cider bottle exchange, but I’m open to discussion knowing that some beers are more complicated to make than others.

I have a bunch of cider ferments about to kick-off (3 UK juices, 1 batch from my dad’s orchard, some yeast experiments with Costco juice). I’d be willing to do a now-for-later trade if you’re trying to clear out keg space now (and want different, potentially poorer, cider in return… and trust that I won’t cut and run).

I should also say I can help run this alongside the next regular bottle-exchange if it helps (announcement coming!). I don’t really want to be in the business of negotiating trade terms, but if you and other people are willing to hammer out the details, I can hand off the bottles.

Thanks for the offer Sam, I’d be happy to trade some ciders, especially if there are any experiments in there. I haven’t had much of it yet, but the UK cider I made last year is really excellent. The fancy apples really do make a difference.

Now or later, both work for me. Nothing is in bottles yet and I have enough kegs to spare that I’m not too worried. I have a little research to do on my end. Not all my kegs are fermented with the same yeasts (usually english ale vs Cider yeast), so I have a few subtly different ciders to trade. I’ll post the results later today.

And thanks for the logistics offer. We’ll see what kind of interest this gets.

Hey, I have my first batch of cider ready (I think) to bottle! I made it using the apple juice Moût was selling in bulk last October.

Anyone interested in a side share in parallel with the coming bottle swap? I’d love to get some feedback from “experts”.

Are there any preference for still vs sparkling cider?

For sure Norm!
I have a few to choose from. I’ll prepare a selection for you and Sam, and anyone else that wants to swap.

I am in too. I can offer around 4 varieties.

Great! I have four or five subtly or (not so subtly) different ciders to share.

I won’t have that much to offer in exchange, but I’ll throw a bottle of my cider in both “still” and “sparkling” versions for each of you.

So far we have:

I drank @Norm’s still cider yesterday. Very nice. Perfectly clear (see photo), refreshing and light with a very clean fermentation and nice choice of yeast. I enjoyed this while bottling the extras from the Aler’s barrel RIS project (I’m calling it “Aler’s Revenge”). The contrast between the two drinks is amazing and complimentary.

I’m looking forward to trying the others. I must say, I was pretty excited when I got a box full of ciders and a box full of beers from the March exchange. It’s going to take me a while to get through them all, but it’s the kind of challenge I can get behind. 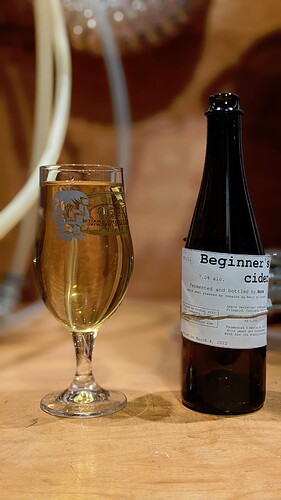