A lifetime of brewing!

A lifetime of brewing because I think some of you might not have been born yet when I started brewing!

Tomorrow, February 24th marks 27 years since my first batch of homebrew back in 1995 and to celebrate I’ll be brewing a Canadian Pale Ale, recipe #353. (That an average of a little over 13 batches per year…)

I’ve seen A LOT of changes since I started brewing, from the equipment and ingredients that are readily available now; to the quality and variety of the beer brewed by most beginner homebrewers.

I’ve also seen several MontreAlers turn their hobby into very successful careers and that certainly warms my heart. What definitely hasn’t changed is the camaraderie and the love for the hobby found among groups of homebrewers such as the MontreAlers. I’m proud to be a member of this group that I helped form and grow over all these years.

Cheers to you all.

Thanks for sharing Denis, I really appreciate your participation in the group. Any chance we can see the celebratory recipe?

I’m glad you are still committed to the hobby. Has it always been just a hobby or was there a time you dreamed of being a pro?
What makes a Canadian Pale ale different than an APA?

Congratulations Denis! Recipe 353, this is quite a successful adventure in homebrewing! And very inspiring.

I started homebrewing when La Cachette du Bootlegger was in a small house in Ste-Anne-de-Bellevue and were the only ones offering grain crushing on the island (that would be around 2000-2002) ! Then, I stopped for ~20 years and now everything has exploded! From all-in-one systems to hop varieties, access to raw material from around the world and now to the plethora of yeast strains available to the homebrewer, the scene has changed significantly indeed.

I hope you be able to brew another 647 batches, so we can celebrate your 1000th batch all together!

Just the fact that I’m brewing it in Ontario.

Actually, in this case I’m using some 6-row as well as 2-row, so I guess that makes it somewhat Canadian too.

I guess like any other successful homebrewer (I won medals in pretty much every competition I entered back in the day) I considered “going pro” but the closest I ever came was brewing the first “Black Out Stout” at Brutopia along with Bruce McNabb who was part-owner and brewer at the time. It was pretty cool to sit down with a professional brewer, work out a recipe, and go through the process of measuring and crushing so much grain and weighing out so much hops, etc. I don’t remember exactly when that was but probably close to 1998 or 1999.

Sure! The recipe is based on an American Pale Ale recipe I brew quite regularly and tweak every time I brew it depending on what I have on hand in terms of hops or what grain I need to use up. I don’t usually dry hop this recipe but decided to this time to start using up some of this Citra I have as you can see my inventory, I still have a pound of it. The little bit of Carafa is mostly for colour and pH control in the mash as is the acidulated malt. (I’m on a well with really high bicarbonates and need to preboil my water before using it.) The lactic acid only goes in the sparge water. I mash @ 66C for about 70 mins, then always FWH since I’ve found that bitterness from it is much smoother and the oils reduces some of the early foaming from the boil. Typically after 10 mins of boiling, I’ve hit the hot break and there’s no more foaming.

If any of you decide to come out for a visit this summer (I’m just minutes away from Wood Bros Brewing btw) it should be on tap. 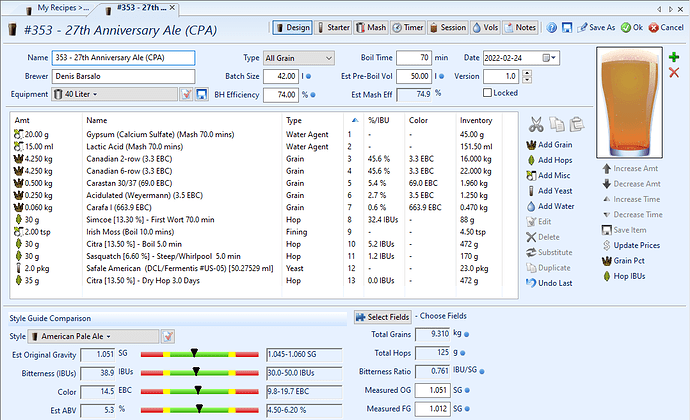 Wow 27 years that’s a lot ! Congrats, i’m quite impress that you keep that hobbie for that long.

Got to try that FWH soon…

Thanks for all the kind words. I hate to disappoint anyone but there’s no way I’ll hit 1,000 batches in my lifetime seeing how I’ll be 67 this summer and I don’t expect to live much past 100.

Who knows how long I’ll brew!?

That’s awesome Denis. It’s a somewhat demanding hobby (space, time and physical ability to lift heavy things), so not very many people manage to maintain it as long as you have. I started in '98 when I took a chemistry of winemaking class at John Abbott. Like Norm, I got my first equipment and ingredients from the Bootlegger when they were in Ste-Anne de Bellevue. I brewed with extracts irregularly for the next 15 years or so and made the switch to all grain around 2013.

Until my back or my liver gives out, I’ll keep on brewing.

@Terry It occurred to me today that using Sasquatch hops would also make it quite Canadian seeing how Sasquatch is the only truly Canadian hop.

It was developed in BC a few of years ago and only available to homebrewers not that long ago. It gives off a bit of a tangerine flavour.

I was curious about that one when I saw the recipe. Will have to try a smash beer with it.